Bicycle Race is a song written by Freddie Mercury, in 1978

released for the album Jazz.

To promote this song, Queen staged a bicycle race with 65 naked women, in Wimbledon, London. A clip from this race was used as the single cover. The video was originally banned, and the video was re-edited with colour added to censor out any offensive imagery. The song is famed for its 'bicycle bell solo', which fans would often replicate live at Queen concerts with their own such bells.

It was released as a Double-A side with the song Fat Bottomed Girls. A still photograph from the naked bicycle race was used for the single cover, a pair of bikini bottoms crudely painted on the photo of the naked rider. 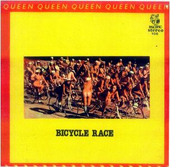 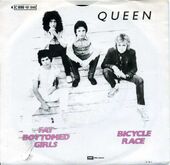 Retrieved from "https://queen.fandom.com/wiki/Bicycle_Race?oldid=5015"
Community content is available under CC-BY-SA unless otherwise noted.